Oleg Verniaev, unfortunately, is still getting a lot of hate about his refusal to talk to Russian journalists. I will not even post links to the hideous things that people say about him.
I understand his decision and I think it's different from Lebanese athletes not letting Israelis on the bus or the Egyptian judoka refusing to shake hands with the Israeli who beat him. Oleg  is always friendly with the Russian athletes, he's known them for years and friends with many of them. Just look at the picture he made with Nikita Nagornyi after Russian media started writing about the whole "interview refusal" situation. 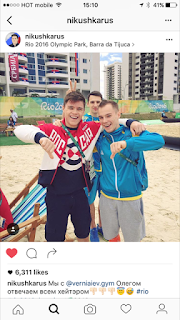 The capture says "Oleg and me are replying to all the haters".
So, Oleg's beef isn't with Russians as individuals or with Russian athletes, it's with Russian government. Russian media are heavily controlled by the government and have been spreading anti-Ukrainian propaganda, so it's pretty clear why Oleg doesn't want to deal with them. Consider also the fact that Oleg was born in Donetsk, one of the cities currently occupied by the Russian army, so for him it hits home.

Oleg is also such a class act when he talks about his competitors. When asked about the judging during the all-around he said that he believes his scores were deserved, he's really happy to compete with Uchimura and be so close to the gymnastics king and he hopes to beat him one day.

He also talks about the team final, when the Ukrainian MAG team was accused of throwing the competition. He says that they learned that Maksim isn't able to compete only 15 minutes before the start. They tried to figure something out, but they don't speak English that well (and I can attest to that - I was interpreting for the Ukrainian head of delegation during Euros, because she spoke no English whatsoever) and were just not able to understand what they need to do and do it in time. If you don't know, Ukrainian gymnastics federation is extremely poor, they're severely underfunded, during Euros the ministry of sport didn't pay for some of the coaches to go to Bern and they didn't even have money to send all the delegation to the banquet after the competition. So, I can imagine they don't have the funds to bring an interpreter with them and get into these kinds of situations.