Ksenia Afanasyeva decided that if she's not going to Rio she might as well get married. She posted a paper from the registration office on her instagram. It says that Ksenia and Roman are getting married on the 10th of September 2016 in Tula. In Russia the system works like that - you apply to the registration office to get married and they give you a date in about a month. Russia doesn't recognize religious ceremonies, so all marriages must be officiated in a government registration office, although later a couple might perform a religious ceremony in church as well, if they wish so. Most don't. 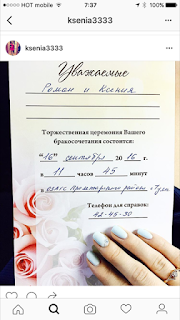 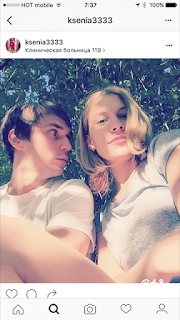 She didn't announce official retirement for now and she probably won't till the next year, if she decides to retire, because being on the national team means she receives monthly salary. However, I think, it means that she's retiring - she's been talking forever about wanting children and studying veterinary medicine and gymnastics doesn't fit these plans well.
Ksenia is 24 years old. In Russia that's kind of on the older side for marriage, actually.  When I was 24, most of my classmates were already married and had kids. So, Grishina's marriage at 19, for example, is not considered early in Russia, it's a normal marriage age. Take in consideration, that Russians usually graduate from high school at 16 or 17 and then go straight to college. That means that at 20-21 they already have a BA and start working. Many girls think that the last year of college is perfect for getting married, because this way they'll take their husband's name and get their college diploma with a new name already. Yeah, Russia is still pretty patriarchal. Although, in Israel I also often get asked why I kept my last name. I usually answer "because it's the 21st century", but most don't get it.

Russian journalists continue being sexist pigs. In Russia, having sculpted muscles, especially biceps, is considered very unfeminine and ugly. So, A Russian media outlet published an article about yesterday's AA final called "Beauty and the Beast". In their mind Aliya is "Beauty", while Simone is "Beast". They go on describing Aliya as "princess", while Simone and Aly get called "bodybuilder", "terminator", "Schwarzenegger in a skirt", "triangle bodies"... If you thought you can't be more disgusted, read on: they talk about the recent scandal in US gymnastics with coaches abusing and raping gymnasts and say that Simone was surely never an object of a pedophile's lust because of how she looks.
Ok, I'm pretty used to open sexism in Russian media, but this is too much even for me...