The Russian wedding frenzy continues, it seems like everyone is getting married in the past couple of months and Aliya, apparently, decided to follow the lead. In several recent interviews she said that wedding is on her mind, but she's not getting married soon - so, I guess, it's all been a ploy. Today WOGymnastika posted this photo 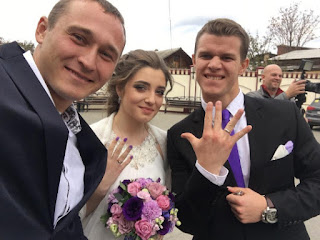 You can clearly see Aliya in the wedding dress, she and her boyfriend/husband are wearing wedding rings.
Wow, it's certainly been a surprise for me. How about you?

In other less exciting news - Aliya gave an interviews last week (no mentions of the wedding there!)
You can see some photos of her at the press conference, she's answering the questions of students at her own university - http://press.sportedu.ru/item/aliya-mustafina-o-svorovannom-v-rio-telefone-zolote-olimpiady-i-mechte-poletet-na-lunu
She said that she really wanted to help her team in Rio and to her the national anthem played. Her phone, apparently, was stolen from her room on the last day she was in Rio (I hope no nude photos were there).
She didn't care about all the doping scandal and politics, people in the gym were friendly to her.
She says it's much easier to become an Olympic champion when you're 17 as opposed to 21. Training can be hard for her, because of her multiple injuries, she's always afraid to get injured again while at the gym, but this fear disappears in competition.
She controls her weight and nutrition, she thinks she's old and responsible enough to do that.
She believes she wouldn't be able to survive the kind of conditioning and training the Simone Biles does.
She chooses her own leos and purple is her favorite color (hence her wedding flowers and mani!).
She's really tired of gymnastics right now and just wants to rest. If she'll find she's missing gymnastics, she'll return.
Her dreams are: to graduate from the university, to become a mom and to fly to the Moon!