So, Russian media and fans continue their outrage over Simone's ADHD and her use of methylphenidate (active component in Ritalin). It's not pretty. Clearly, the fact the in Russia stimulants are class I drugs alongside with heroine and cocaine affects the perception of people. The call Simone a drug addict, they call for her being stripped of all medals, that if she's so sick she shouldn't be allowed to compete etc. This makes me really sad, because such a public discourse will make it much harder for people with ADHD  in Russia to get diagnosed and get proper help.
Nabieva expressed her opinion on Vkontakte (Russian social media), reposting the news and saying "Shocking! Give me amphetamines and I'll go to the Olympic games". Here's the screenshot of her post. 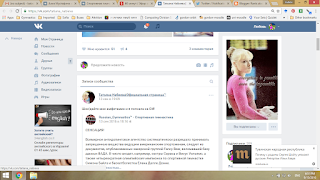 This is going to be pretty disgusting, so prepare.
Here's a summary of some moments from this program (a lot of it was concerned with technical aspects of the hack and whether it's possible to prove that Russian government was involved).

The hosts called Simone "a sick gymnast" and said that narcotics are the secret behind her success. They implied that Paseka was robbed by Simone in the vault final, because Simone would have been disqualified.
Paseka said that she was surprised how calm Simone was in Rio and that now she knows it was because of doping.
Lidia Ivanova was also invited. She said she's happy that this hack happened, because finally people talk about the fact that all American athletes use doping. She then goes on complimenting Masha's looks and saying that Simone's her complete opposite (as in "ugly") with a body not suitable for gymnastics. She continued to insult Simone's looks for a while. She said that if Simone really had ADHD shoe wouldn't be able to compete on such a high level. She also implied that Biles takes more than just methyphenidate.
Then Nikolai Durmanov, former head of RUSADA, said that the medications that Simone and Williams sisters took are heavy narcotics worse than heroin that lead to addiction and death.
All of the hosts and guests went on to have a racially charged discussion how the prominent physique of Williams sisters and Simone cannot be a natural outcome and isn't normal, because women can't have that much muscle mass. They compare how Sharapova looks (pretty) and Serena (ugly) and ask: how can it be that Sharapova is disqualified for doping and Serena isn't? All the while they show a photo of Williams sisters in which they look hot and fierce as hell, but, apparently, according to Russian beauty standards it's manly and hideous.
Than a synchro swimmer Aleksandra Paskevich offers her opinion that taking Ritalin in artistic gymnastics would be the same as taking a drug that allows to breath underwater in swimming, it's that potent and performance enhancing.