I’ve just learned about the abuse scandal that happened this summer in Israel – the head coach of the rhythmic program was accused of physical and verbal abuse towards gymnasts. I have no idea how I missed this scandal, considering I’m normally on top of the news, but it somehow happened.
Anyway, in light of the recent lawsuit against the Karolys and the discussion about their coaching methods, I thought this story would be interesting to talk about.
So, first a little background on Irina Vigdorchik, the coach in question. 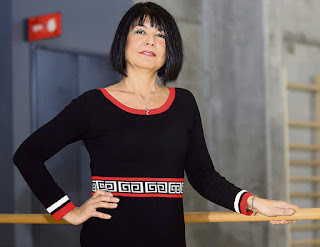 Vigdorchik used to be a rhythmic gymnast on the Soviet national team until she moved to Israel in 1979. Here she immediately got onto the Israeli national team, but Israel boycotted the 1980 Olympics, so she wasn’t able to go to the Olympics as a gymnast. She went multiple times as a coach and as a mom (her daughter was on the Israeli team in Beijing). She founded a gym in Holon (the host city of the 2016 Rhythmic Gymnastics Euros) and became a major figure in the Israeli rhythmic gymnastics. She did a lot for making rhythmic gymnastics a very popular (and internationally successful) sport in Israel and under her as the head coach the team won 23 international medals.

However, this summer she was at the center of an abuse scandal.

Now, below I'm trying to piece the whole story from a lot of sources in three languages (Hebrew, Russian and English). I give links to all the sources, but I don't know whether all the sources did a great job investigation the situation, so if some details are wrong, please, let me know.

It started with Kati Levin, a national team member, alleging that Vigdorchik kicked Levin during warm-up at the World Cup in Kazan in July 2016 (just a couple of weeks after the team won gold at Euros). The allegations were corroborated by another gymnast. In addition, the parents of several gymnasts sent a letter to the Israeli Gymnastics Federation, saying that it was not an isolated incident. The letter claimed that Vigdorchik repeatedly abused her gymnasts both physically and verbally and she also openly drank alcohol during practices. The gymnasts on the national team refused to be coached by her.

Vigdorchik denied all accusations.
The Federation formed a committee to investigate the situation.

However, more drama started.
The coach's estranged husband (they separated after 30 years of marriage) and a former official in the Federation came to her rescue, saying that she could've never hit a gymnast. According to him, the accusations are "vile lies born out of flaming jealousy" and "she can scream at gymnasts, be demanding, strict... But hit or kick them? It's impossible!" According to him, other coaches wanted to take Vigdorchik's place as the head coach and formed a conspiracy, urging parents to send a letter with fake accusations. He specifically puts blame on Ela Samofalov, another rhythmic coach, the personal coach of Neta Rivkin. Samofalov said that these accusations are ridiculous and she's going to sue for defamation (I don't know if she really did, couldn't find any information about it).
Adding to the drama was the fact that the whole thing happened less than a month before the Olympics. This year's team was the most successful in the history of rhythmic gymnastics in Israel, they've just had the historic gold at Euros and they were one of Israel's biggest hopes for a medal. Imagine changing the team's coach less than a month before Rio.

So, after investigation the committee decided that Vigdorchik would stay in charge of the team (sort of like a team coordinator), but she wouldn't be coaching them and wouldn't be allowed too close to the gymnasts.  Ela Samofalov, Raya Irgo and the choreographer Ayelet Zysman were assigned as the actual coaches. The team placed 6th in Rio. I guess they were affected by the scandal and the coaching change, who knows how much it contributed to their mistakes on the floor.

So, what's going on now?
Israeli Gymnastics Federation is looking for a new head coach, since Vigdorchik's contract was not renewed.
Vigdorchik was congratulated by many officials, including the President of Israel, on the team's performance in Rio and voted the best coach of the 2016 season by Hapoel center. She is planning on writing a column for Walla Sport, a local news site. She is planning to talk about the state of sport in Israel and how it can be improved. She thinks that the only criterion for judging a coach's performance should be the results of the athletes coached by her. She finds it outrageous that her contract wasn't renewed after the Olympics.
She also thinks that the scandal was the reason for the 6th place in Rio, because the girls couldn't train properly during the investigation (when Vigdorchik was suspended) for 10 days. On the other hand, the gymnasts are saying the scandal hasn't affected their performance at all. Vigdorchik puts a lot of blame in the scandal on the parents of the gymnasts, saying that they interfere too much with the training process. In a recent lecture she said "families are the worst", and lamented on how she gives everything to a gymnast only to learn that the family decided to move to another club. She also rants how Israeli kids aren't taught  by their families to endure hardship and to persevere through pain and disappointment, so it's hard to make good athletes out of them.
I couldn't find any information if her coaching license has been suspended or revoked by the federation and if she is allowed to continue coaching kids. I have a feeling she isn't, but she said she's open to job offers. Looks like the Federation isn't planning on employing her in any role anymore. There was no criminal investigation into the abuse allegations  and she was not sued by the gymnasts.